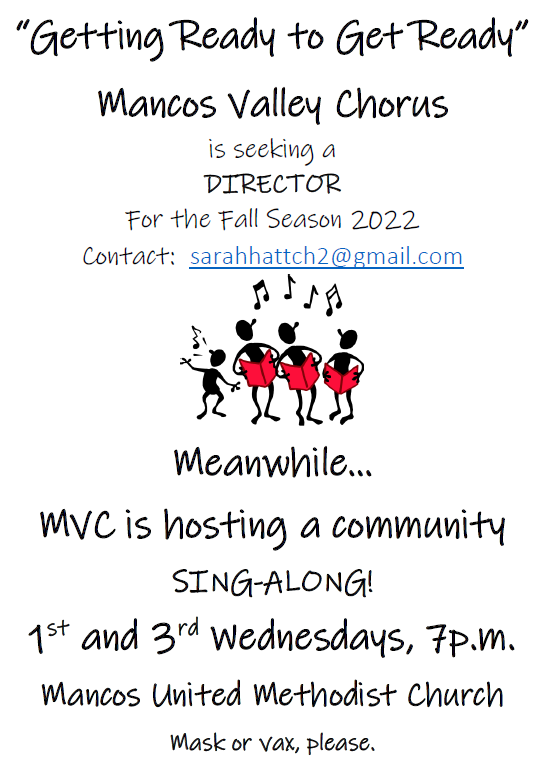 Singers may join the Chorus without auditioning. The size of our group is currently limited to 36, to fit our rehearsal facility. A dues scholarship is available for anyone for whom the $20 fee would be a hardship. We hold around 12 weekly rehearsals to prepare for each concert. Rehearsal CD’s are provided for each member of the chorus.

The early beginnings are nebulous with a few Mancos residents singing together now and then, here and there without much organization. The Mancos Valley Chorus was established in 1998 by a few friends and neighbors interested in having music as a part of their life and in sharing that love of music with the community. Being few in numbers and having no funding, music was donated, directors were whoever was available, and venues were wherever and whenever allowed. With the advent of Mancos Valley Resources, the 501 (c)(3) umbrella under which the non-profit Chorus operates, the Chorus began collecting donations at concerts, holding fundraisers and writing grants. Our numbers grew modestly as did our bank account.

In 2000 the Chorus employed a director along with an accompanist. Again, our numbers grew; our fundraisers became more productive as did the donations and the signups for the City Market Cares Program. Today we are fortunate to have several sponsors and our numbers have almost outgrown our rehearsal and concert space at the Mancos United Methodist Church. We present no less than four concerts each season and as many as six, and perform occasionally at special events.

Welcome to our history and our future!